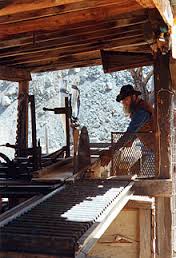 Example of an early saw mill

“On Sparrow creek a saw-mill was erected (before the Macksville grist-mill was built) by Morgan Mills. He used to saw day and night. He would set his log and start the saw, and then lie down and take a nap. When the saw got through the log, the snapping of the trigger would wake him up, and he would set the log again. That mill went down sixty years or more ago.”  Past and Present of Randolph County, Indiana by John L. Smith and Lee L. Driver, 1914

(The only Morgan Mills this could be is the original Morgan (my fourth great grandfather 1794-1878) because the other three Morgan Mills were too young to fit the time frame.)

The Macksville mill referenced in the first paragraph was owned by several people but Solomon Reece Wright (my third great grandfather, 1802-1888)was reportedly one of them. I don’t yet know the dates he owned it. It will be fun to research further.