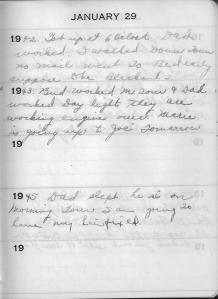 In the 1942 entry Grama talks about having to go to bed early because they were supposed to be in blackout conditions. Wikipedia says “A blackout during war, or in preparation for an expected war, is the practice of collectively minimizing outdoor light, including upwardly directed (or reflected) light. This was done in the 20th century to prevent crews of enemy aircraft from being able to navigate to their targets simply by sight, for example during the London Blitz of 1940. In coastal regions, a shore-side blackout of city lights would also help protect ships from being seen in silhouette against the shore and attacked by enemy submarines farther out at sea hidden from view.”